As we enter the Holiday season, this December Special Market Update is intended to be more fun and lighthearted than the information we usually deliver.

In 2018, through a combination of a tightening Federal Reserve, trade tariffs and global slowdown fears, the fourth quarter handed investors a holiday stocking full of coal as the S&P 500 and NASDAQ moved from +9% and +16.5% year-to-date returns respectively on October 1st into negative territory by year end, including a more than 9% loss by each index in December.

Were we robbed of one of the great Christmas miracles – the annual Santa Claus rally on Wall Street?

What Is a Santa Claus Rally? 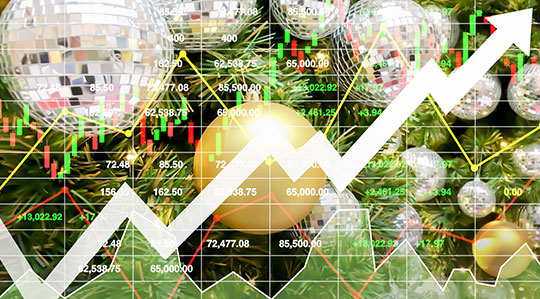 The Santa Claus rally was first referenced by Yale Hirsch in his Stock Trader's Almanac in 1972 (1) and is defined as a sustained increase in the stock market that occurs during the last 5 trading days in December through the first two trading days in January.

Seeking Alpha recently addressed this phenomenon, showing that since 1969 the Santa Claus rally has yielded positive returns in 34 of the past 45 holiday seasons. The average cumulative return over these days is 1.4%. Going back even farther, since 1928 there have been 66 positive Decembers, 25 negative (the largest +/- spread of any month) and an average return of 1.3%. (2)

Many consider the Santa Claus rally to be a result of people buying stocks in anticipation of the rise in stock prices during the month of January – the "January Effect". Other explanations include: tax considerations, retirement funding, pension contributions, institutional rebalancing, the investing of holiday bonuses, and general feelings of optimism and happiness on Wall Street.

All of these factors could increase buying activity and have the potential to drive equity prices higher. However, just as no one is certain how Santa slides down every chimney in the world in a single night, no one has been able to definitively say what causes the Santa Claus rally phenomenon or when one will occur.

What Should I Do Now That I Know About the Santa Claus Rally?

Market technicians pay attention to cyclical trends and, at times, find ways to exploit historical patterns such as a Santa Claus rally. They tend to do so repeatedly over short periods of time and by tactically limiting both the amount of risk and reward they take on. These speculators also use technical patterns in particular indexes and carefully determine their planned entry and exit points.

None of this is useful for most investors who have neither the trading experience nor the technical tools to manage risk in such short time frames. For buy-and-hold investors, like our clients, and others saving for retirement in 401(k) plans, the Santa Claus rally does little to either help or hurt them over the long term. It is really just an interesting news headline from the stock market periphery, but not a reason to become either more bullish or bearish.

According to Barron's, trading in the period after Christmas is not recommended. There is little upside opportunity and the market has declined during this period in two of the three most recent years. The Santa Claus Rally is statistically real, as the data shows, but whether this year will see a Santa Claus rally (2/3 of the time) or be one of the off years (1/3 of the time) is anyone's guess. Always remember, the equity markets have no memory.

As we enter 2020 we'll have enough economic, geo-political and earnings news to last us for the next 12 months. Today we wanted to simply say Happy Holidays!

In the meantime, keep an eye out for Santa Claus, as he may just bring a cherry-on-top late December rally to what has already been a marvelous 2019.

Season Greetings from the team at WT Wealth Management!